DESCENT is the second Level of BIT.TRIP BEAT. It sees CommanderVideo learning to use his limbs, while his mind undergoes a descent (fittingly enough) through an underground, magma-filled cavern. The level is considerably more difficult than the previous one. Like it, however, it has eight stages, culminating in a bossfight. It features the music track "Descent".

The music is eerie and in a minor key. In MEGA, the Beats now make a trebley chirping sound.

This level comes after TRANSITION and is followed by GROWTH. 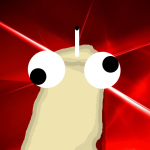