BIT.TRIP FLUX is the final game in the original BIT.TRIP Hexalogy. The game is something of a bookend to the series, playing identically to that of BEAT, only on the opposite side of the screen. It has a light, gentle, and comforting tone, if slightly somber due to its overarching themes of death and finality.

CommanderVideo is dead. Before he can ascend to the afterlife, he must return home, looking at his life from beginning to end, learning to let go of the ones he held dear, and view his accomplishments as a whole picture. Only once he is able to open his eyes and see, will his, and by extension, the Player's BIT.TRIP truly be complete.

The game's title screen music is Strange Comfort by guest composer, Bit Shifter, although the first part of the loop is exclusive to the game's version.

The HUD is like the BIT.TRIP BEAT HUD, but everything is reversed; as in, what was on the left is now on the right and vice versa.

As the final game in the original series, the highest MODE has been made available. Please note these are listed from highest to lowest.

This is the highest mode in the game. The HUD takes on a sharp red-and-white palette. The Paddle is a solid Red, and the progress bars fade from red to white, and back to red again in a large gradient. The text becomes monochromatic and the specifics of its design depend on the stage. The Beats make sounds of the violin family. The score multiplier reaches a whopping x500. Achieving a MODE-Up will award a MULTI+ bonus multiplier, which will increase the current score multiplier by 1 each time it is achieved. In BIT.TRIP Saga, the word META on the bottom screen gets a unique animation unlike anything else shown in this MODE: META is completely white, and grows progressively from tiny to giant, then pops back to tiny over the course of two beats, unlike the rest of the loops that usually last one beat.

GIGA appears very similar to HYPER at face value, possessing a similar, but darker magenta hue. The text has a sliding gradient effect which gives the effect of tilting left and right in 3D space. Every Beat makes a gentle, echoing acoustic guitar tone. The multiplier hits x200 when you MODE-Up to it. Doing well here will allow you into the game's, and series' highest MODE, META.

EXTRA Mode is the mode up from ULTRA. The HUD gains a "neon" look to it, becoming clear with brightly coloure borders. The borders themselves cycle through random pastel colours in time with the cascading effect the text has, similar to how EXTRA appeared in FATE. The Paddle mirrors this stile, gaining a somewhat chunkier appearance in this MODE. Every beat makes the sound of a note played on a electric piano. Your multiplier changes to 100x upon reaching this MODE. The next MODE-Up is GIGA.

ULTRA removes the gradient effect but keeps the soft scroll through rainbow colours. The colours themselves are a bit brighter than in SUPER as well. Additionally, the labels for the next and previous MODE scroll from left to right. Every note makes a soft, windy sound upon hitting the Paddle, like a flute, but with a lower pitch. They make a more natural flute-like sound upon returning. The multiplier upgrades to x50. EXTRA comes next.

In SUPER, the HUD is overcome by a scrolling gradient of darker, more saturated rainbow colors. The Beats now make a tinny, electronic string sound when hit, and a soft chirp-like beeping sound when they return. The multiplier changes to x20 here. MODE-Up to get to ULTRA, or Down to get to MEGA.

Play well enough in HYPER to MODE-Up to MEGA. The HUD changes to a randomized cycle of pale, pastel rainbow colours, Paddle included. The score multiplier is upgraded to x10 here. Every Beat makes a deep, echoing banjo sound upon hitting the Paddle, and a distinct, airy sound upon hitting the far wall after being rebounded. MODE-Up into SUPER or MODE-Down into HYPER.

This is the starting mode. The HUD is a bright magenta colour, Paddle included. The text on-screen has a gentle gradient to a darker shade of magenta. The score multiplier is x1. Hitting a beat will make a softer, gentler chiptune noise in comparison to previous games' HYPER sounds. Perform well to MODE-Up to MEGA, or MODE-Down to NETHER if you play poorly.

This is the last mode, giving you a chance to get back into HYPER. There is no musical audio in this MODE. The sound of hitting Beats is the same as in BEAT, though it's a fair bit softer and less sharp, additionally, Bonus Beats make a chirping sound, the very same that played upon collecting Golds in Runner's Retro Challenges. The interface is completely in black & white, though the backgrounds of the stages are still visible in monochrome. There is no score displayed and the MODE has a multiplier of x0, meaning no points can be earned while in NETHER. Achieving a MODE-Up will return you to HYPER, but, in a first for the series, achieving a MODE-Down here does not restart the entire stage, but merely the current section, returning you to HYPER in the process. Your score at the start of the section is retained, you only lose your MODE and multipliers.

The first level of the game, unlocks Perception once it is beaten. The backgrounds of this level, represent FATE. The modes up to GIGA show a track that must be followed.

Commander Video is dead. He has to depart from all that is physical, the colored symbols representing his friends.

The second level of the game, unlocks Catharsis once beaten. Commander Video is now able to see the world from the outside. Everything is so simple now. The 5 symbols represent the past 5 games.

In Perception, Commander Video finally sees his Growth from the beginning. Moding up will descend you in deeper and deeper layers of the cube, and in Meta, you see an egg cell dividing.

With the last level of the game, Commander Video is finally returning home. He sees the first level of BEAT, Transition, from a new perspective.

Commander Video "links" up with the symbols, creating a rough picture of him as a whole person.

He finally understands. These experiences are the whole of him, they make him who he is. His journey is over and it's time to return home.

The boss in Epiphany is like a mash-up of Breakout and Pong, except you are trying to break through the opponent's wall and hit the object in the back of the wall to win, as you have your own. If your side gets hit, then it counts as missing a beat, and you may mode down. However, hitting the opponent's side acts vice-versa. If the opponent breaks your goal, then you instantly hit RESET Mode, and restart the boss in HYPER, losing all multipliers and combos.

Worth noting is the fact that the Steam version of the game possesses a common bug that causes this boss to become unbeatable, as the opponent paddle never misses.

The boss in Perception is an obstacle course where you must dodge all of the circles that come your way. In the middle of the level, the opponent appears and increases size, hiding circles about to hit you. This happens a second time, just before the final wave. At the end, the opponent shrinks, and then flattens into nothing.

This boss represents his anger that drove him to his blindness. The only thing he can do at this point, is to trust his instincts.

The final boss is the same paddle as the previous levels, but this time, it blocks the entire left side of the screen, mimicking the power-up "MULTIPLY". You must reflect the beat that comes to back you again and again to damage the opponent. At set intervals, the beat increases in speed. Once hit enough times, the opponent starts to fade away. After 15 consecutive hits, the boss dies. However if you miss the beat, the boss heals to full health, and the process starts over. This boss could last forever, as the other bosses have a set objective to complete. Your score is still affected when fighting this boss, so it is possible to end up with a very high score once the level is completed.

In the end, Commander Video finally breaks down the wall, anchoring him down to his physical life.

After the wall is broken down, the player regains control of the Paddle. All UI is gone and the music is replaced with gentle ambience. Clusters of beats appear, traveling slowly and being relatively easy to hit. As the player continues, the screen is slowly engulfed in white, making it increasingly more difficult to see incoming beats. Inevitably, the player sill succumb to the blinding screen fade and miss beats, resulting in a definitive GAME OVER.

You can see semi-opaque words at the beginning of each Stage.

The words are shown in this order: Stage 8 to Stage 1.

Once you put all these words together, it gives you the following text:

You can see that in those three levels the level names of the other games scroll by quickly and semi-opaque in reverse order; starting with Catharsis from Flux and ending with Transition from Beat (Runner 2 and 3 not included and only the names of the zones in Runner).

Throughout all the levels, binary code is spread everywhere. The "segments" in the stages(1 to 3 stripe BEATs) have either a zero or a one in the background behind them. In Catharsis, during the MULTIPLY power-up, white BEATs appearing up and down represent binary in morse, the last BEATs before the boss represent binary in braille, and in the ending level after beating Catharsis, there is also quickly flashing binary code at the beginning.

If you decode all and put it together, it gives you the following sentence: "I AM HOME" 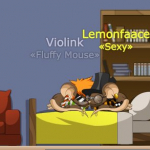 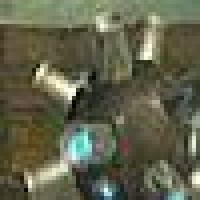 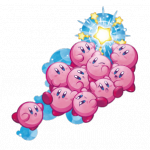